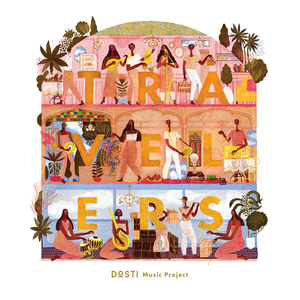 Found Sound Nation's Dosti Music Project brought together inventive musicians from Pakistan, India, and the U.S. in the spring of 2015 and 2016 for a month-long residency and tour. Artists included Pakistani experimental electronic artist Slowspin, Virginia born singer/songwriter Abakis and multi-instrumentalist Danish Khawaja (Fat Bird). During the residency the artists collaboratively wrote, recorded and performed original music while reinventing traditional music, and developing initiatives that would make a positive impact on their communities. The album also reflects its origin’s namesake -- Dosti, meaning friendship in both Urdu and Hindi -- and a statement to transcend political and cultural barriers through cross-cultural musical collaboration.

Just a few hours into the first Dosti Music Project session at the Atlantic Center for the Arts in central Florida, South Indian percussionist Darbuka Siva, who had never met a Pakistani before, discovered that his new Lahori bandmates loved some of the same Tamil folk tunes he grew up with --even if they didn’t know the meaning of the words. In turn, Siva had long been entranced by Sufi Ghazals -- performed expertly by his new Pakistani friend Mohsin -- while missing the finer points...

Just a few hours into the first Dosti Music Project session at the Atlantic Center for the Arts in central Florida, South Indian percussionist Darbuka Siva, who had never met a Pakistani before, discovered that his new Lahori bandmates loved some of the same Tamil folk tunes he grew up with --even if they didn’t know the meaning of the words. In turn, Siva had long been entranced by Sufi Ghazals -- performed expertly by his new Pakistani friend Mohsin -- while missing the finer points of the Urdu poetry. Siva describes how prior to the residency, Pakistan seemed like a distant foreign nation, and yet at Dosti he instantly experienced the deep cultural continuity that remains despite 70 years of political strife.

This connection runs through Travelers, the first release from Found Sound Nation’s newly formed record label (release date: May 26, 2017). The collection of co-created pieces captures experiences and sounds sparked during a series of residencies and performances in the US.

In the spring of 2015, and again in 2016, twenty leading Pakistani, Indian, and American musicians spent a month in an intense collaborative residency, curated by the Brooklyn-based artist collective Found Sound Nation. This motley crew of adventurous musicians immersed themselves in each other’s musical worlds -- Appalachian fiddle tunes to Karachi minimalist electronica to classical Hindustani song -- creating original music, reinventing traditional tunes, and forming a community that transcended the boundaries of genre and nation.

India and Pakistan, separated by the calamitous 1947 British Partition, share centuries-old (or perhaps millennia-old) musical traditions, despite saber-rattling on both sides. None of the fellows could anticipate the resonance they would find in these musical commonalities. As part of a group singing exercise, Siva suggested the group sing Majare, a traditional in Bengali, a language he does not speak but can sing. Debasmita Bhattacharya (a native Bengali speaker from Calcutta) and Pakistani indie-rocker Danish Khawaja both knew the tune. Next Washington State-based singer-songwriter Abakis joined in, and it quickly became a unifying anthem of the nascent Dosti community -- later recorded in Elvis Presley’s historic studio B.

Travelers grows out of these harmonious collisions, offering us a new sonic cartography of this splintered region, based in a radical form of Dosti (“friendship” in Urdu, Hindi, and related languages). The Dosti community allowed each of the 20 Dosti musicians to stretch their music beyond themselves and towards one another. In Homecomings, Imran Fida and Mirande Shah weave a border-defying love song that incorporates three traditional tunes sung in Marwadi and Punjabi (two linguistic regions divided by Partition), ending with the line “home is lonely without you oh beloved.” Within this album each instrument and voice forges new pathways, each synthesis establishes its own fresh musical language. A fiddle dances within a raag in the Sufi classic Mahi Yaar Di Gharoli a sarod finds itself at home in Abakis’ folksy tune The Gift, shimmering Sarangi lines frame the soaring vocals of Nandi Plunkett - Brooklyn synth-pop project Half Waif, and Natasha Ejaz’s electronics in Carmen.

The album offers a coherent voice that evokes the spirit of travelling, an out-of-placeness that feels like a homecoming. Dosti reminds us that powerful musical movements emerge from these egalitarian interactions, in which people from radically different backgrounds are tasked with the creation of art, with the reaffirmation of our common humanity. Found Sound Nation believe that, now more than ever, we need these compassionate, generative processes for the continuing vitality of our embattled world.

As Nandi Rose Plunkett, Dosti programs coordinator and artistic collaborator reflected, “It's hard to describe the moment when strangers meet and immediately lapse into a space of camaraderie. There's an easy shift in energy, an opening of the spirit that defies words. It happened before my eyes many times during the Dosti Music Project, when it became clear just how much the people of India and Pakistan share - a strong commonality of history, language, and music. Since most of the Dosti fellows had previously had little interaction across the border, I expected more guardedness, but the affection and acceptance was practically instantaneous. As a result, the music that was created during these interactions has a genuine spirit of open collaboration. It tells the story of a new kind of place, one that isn't stymied by political history or social expectations. It exists as a testament to the power of a deeper kind of human connection.”